I shall cherish this picture.

It shows our #4 in action with her teammate.

And she’s our second girl to wear the number, so it’s special.

Last night was the end.

One of our players, who won’t play again because she is a senior, walked by me last night.

All I could do was hug her.

I didn’t even speak.

I texted another player who hadn’t emerged from the locker room yet.

She’s been a close friend to our girls for 10 years and I’d adopt her in a heartbeat if there were ever need.

I plan on hugging her at tonight’s boys’ game.

She too is finished, a senior.

Another one of our senior players didn’t even play last night.

Her season was over when her shoulder was put out of socket in a different game.

My heart wanted to break as I watched them help her off the court.

She’s been to surgery for it.

My compassion as a Mom almost kept me from doing my stat job.

I’ve known that player for ten years as well.

But last night was the worst replay,

I never wanted to see.

Last year was the most painful basketball season of our lives.

Taking first one and then another of our girls to the hospital for injuries.

And unfortunately, our #4 had more time in injuries than play.

Our #32 was able to finish out the season while her sister watched from the bench.

But last year in playoffs one of our Freshmen was heading down court with the ball, she was going toward the hoop.

Her leg jerked out and she crumpled to the floor while a cry of pain split the cheering atmosphere like a knife.

Our player was quickly surrounded by her parents and 3 brothers.

As they carried her from the court, obviously in pain, holding one knee I prayed.

Much later her Mom told me the details.

The morning of, I was praying.

She’s tough and her smile and her love of sports wasn’t hindered.

And the team was glad when she rejoined them.

But last night I sat in the stands, taking stats and

She crumpled to the floor clutching her other knee.

Again her family joined her on the court and carried her off.

This time too I prayed

My husband wisely reminded me that allowing myself to get too upset wouldn’t help them.

I was able to finish the game stats, but my heart was sad.

The team was too.

At home, in my room, praying for them all, I told the Lord how much I never want to see people hurt.

Even in this I am there.

In focusing on the pain and trials which are common in this broken sin-drenched world,

He will work in this as well.

“Lord, thank You for the times our girls got to play together. Thank you for the fact that we can stand with one another, both in prayer and love, to support and encourage. Lord, thank You for the loving family who were there when their daughter needed them. Please help this to bring them closer to each other and closer to You. Please speak to #22 and help her learn to hear Your voice. Use this time to create a personal close walk with You, Jesus. Please comfort and heal and remove anything which would stand in her way from becoming more Your daughter. For life is greater than basketball and much more important than a season. I love You, Jesus. Thank You for never leaving us nor forsaking us.”

It was super fun.

I was so blessed to go.

Our girl’s high school basketball team had a three day tournament far enough away they were staying in a hotel.

As the “Mom” who was acting as chaperone I got to travel in the van and stay with the team.

It was so much fun.

Our girls played hard and were improving with each game.

No, we didn’t win all of them, but we gained a lot.

Watching our girls work together to score or to deny a score was a joy.

The girls have learned to look to each other instead of trying to force a hoop on their own.

I pray they will take this into life.

God didn’t create us to try to live only unto ourselves.

He placed us with others and He gave us all a goal.

How we work to complete the goal is different, just like on the court there are different positions.

Yet, it can’t be denied that we are able to do so much more with our lives when we work as a team.

I could work with my husband and with my children or I can choose to be self focused and work against them.

What is it worth?

Will I be able to make the goal on my own efforts?

Just like our girls couldn’t go out and score baskets by themselves.

So I’m super thankful for 3 days and 8 teens.

I’ve been reminded of a valuable lesson.

I  want to play my position to the very best of my ability while assisting others, that way we can follow the directions given us by God and reach the goal. 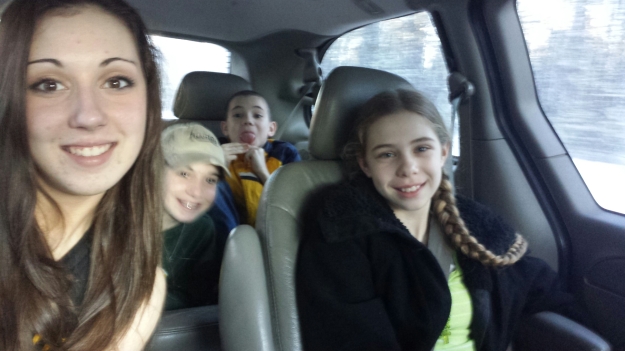 At least for this year.

yet this is us heading home from the final game.

Most of the team are girls who will graduate and move on.

Even our coach is moving this year.

Although we are looking forward to what next year might bring it is good to stop and reflect on this year.

Some amazing moments of team effort.

Like winning a playoff game by 3 points in the last of the fourth quarter.

Making it farther than any girls team from the school in about 20 years.

Pushing through the tough times when injuries had our starters on the bench.

Even the sorrow of loss fading before the pain of an injury in our last game.

Yet with all the blessings of this season and all the excitement it has held,
some of the best things never occurred on the court.

The memories of the send off by several of the younger grades– cards and posters and cheering.

The joy of seeing the girls just hang together.

The chance to love and encourage each one.

On top of all this,
the most memorable event of this basketball season occurred when we couldn’t make the game.

However, we heard about it from many different sources.

While playing Pacific our boys’ team was losing a close game.

Near the end of the game the other team put in a Senior who has never played a Varsity game and it was their Senior night.

Our boys stepped up with sportsmanship.

He was able to make four points in the game.

Our girls’ team and our fans gave the young man a standing ovation as he was taken out of the game.

All of it meant a lot to our daughter who was a member of the girls’ team.

I asked her about it later.

“Honey, I think it’s so neat everyone did that. How did the other girls feel about it?”

” Mom, it was so special to get to cheer like that and we were so proud of the boys because they had played so hard to win. But the other girls really understood about the boy Mom. Because so many of us have family members like him.”

She was thinking of her brother, who has a communication disorder and although is much improved still has trouble with unknown people and places.

I thought of another girl on our team whose sister is both mentally and physically handicapped and has to be carried or pushed in her wheelchair.

Another girl has a sister whose daughter is mentally handicapped.

Yet I dislike using the words handicapped or disorder to describe anyone, because the difference in their abilities isn’t a bad thing.

In fact often times they are incredible people who can teach so much about love and understanding and perseverance and starting fresh each day.

True joy so often shines out of our son’s face, no matter how his day has gone or what struggles he has had, it normally only takes a hug to bring back a smile.

Our Superintendent received a letter from the principal of Pacific in regards to the actions of the boys’ basketball team, the girls’ team, and the fans.

It was printed in our local paper put out by the fire department.

I loved one line especially.

” What this game meant to Austin was more than anyone could ever imagine.  Having everybody, including the opponents support Austin as he suited up as a Pirate for a final time was an experience that he will never forget. ”

I smile as I think of it.

What more could we possibly give than that?

Wins and losses will be forgotten by most.

Who played in which games will be washed from memory by the passage of time.

But to give to another the love and support our teams and fans gave Austin is far more important than who won or who played.

To live a life of love, no matter what team your on.

Now that’s something to cheer for! 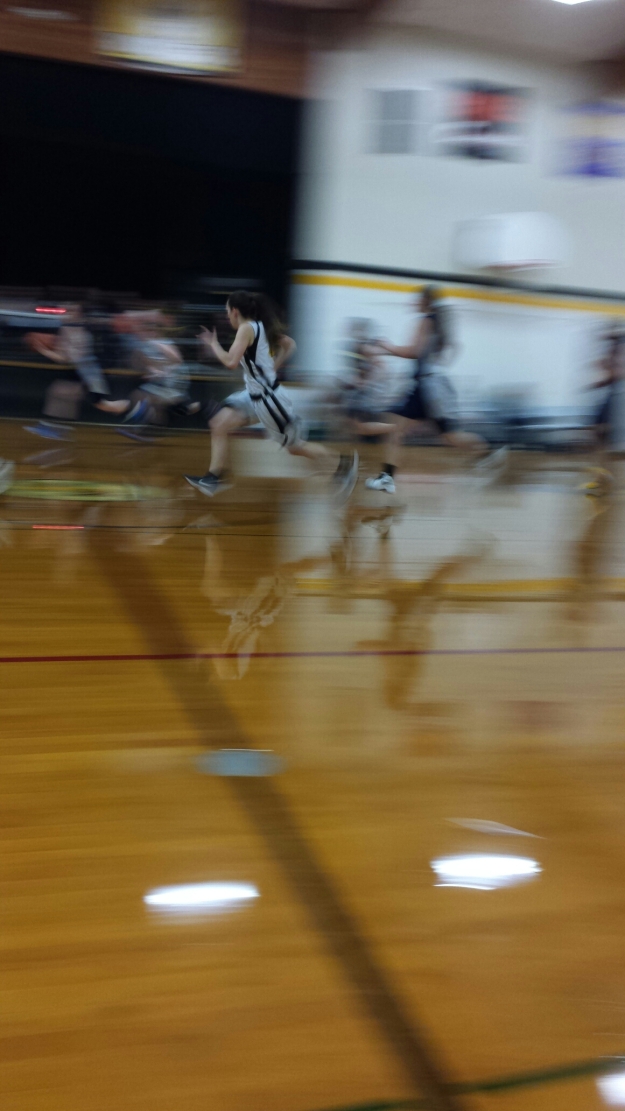 I have learned a lesson,
something I would have never have expected.

As a child I was nearly completely unable to play in any sport.

There was a short time I was in track and enjoyed it.

As I grew my opinion of sports dropped significantly.

It seemed a waste of time, money, and effort.

Until I met my husband.

He was and is an athlete.

As our children have grown I have had to concede to being here and there for sports.

Yet gradually I have been learning.

Our children being involved in a sport is far more than the win.

Like following through on homework, music, and chores even though they are exhausted from practice or games.

Cheering for your fellow players no matter how much play time you get as an individual.

Admitting where the weakness is and working hard to improve.

Listening without excuse or argument.

Giving their all and then a little more they didn’t know they had.

I am learning it’s not a waste of time, money,  or effort,
if
it is used to grow.

Like anything
it can be a tool
or a weapon.

But I am thankful for basketball.

If nothing else,
I’ve learned
a lot!